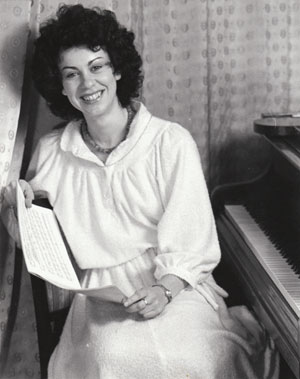 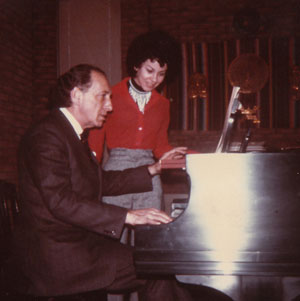 Renťe was born in South Africa. As a child she studied with Adolf Hallis, who was a pupil of Tobias Mattay. She graduated with distinction from the University of Cape Town with a Bachelor of Music degree. During these years Lamar Crowson was her teacher.

While still a student at Cape Town University, Renťe was asked to perform in a concert consisting of works by the so-called Second Viennese School: Schoenberg, Berg and Webern. This music was hardly ever heard in South Africa and the challenge resulted in a life-long passion for Twentieth Century and contemporary music. Well-schooled in traditional repertoire, Renťe Reznek has nevertheless found a special kinship with more recent music. The need to clarify and project new works has been illuminating for her, resulting in a fresh approach to more familiar repertoire.

After graduation, Renťe was offered a scholarship to Carlo Zecchiís class at the Mozarteum Summer School. She subsequently went on a piano scholarship to study with Gyorgy Sandor at the University of Michigan in Ann Arbor, USA. This provided the opportunity to study the piano works of Bartůk (amongst other repertoire) with one of the composerís own students and chief exponents. Renťe Reznek completed two Masters degrees in Piano Performance and Music History. Whilst undertaking doctoral research into the Second Viennese School at Oxford University, expanding on research begun at Ann Arbor, Renťe studied piano with Susan Bradshaw.

Renťe made her London debut in the Park Lane Groupís series ďYoung Artists and Twentieth Century MusicĒ, playing Debussy, Schoenberg and a new piece written for her by Robert Saxton. This debut programme was to set a pattern for the recitals which followed. The Association with the Park Lane Group resulted in her taking part in their 25th and 50th year anniversaries.

Renťe Reznekís concerts of Twentieth century and contemporary music have included many works written for her by composers such as Robert Saxton, George Nicholson, David Earl, Jorge Grundman, Sadie Harrison, Kevin Volans, Neo Muyanga and Johan Cloete. She has received critical acclaim for her playing and for her adventurous programming. Some of these recitals have been cited as amongst the best of the London year by the Financial Times and also by Music and Opera Review. Renťe was much praised for her Wigmore Hall recital of the complete solo piano music of Schoenberg, Berg and Webern.

Renťe has played throughout Britain, Europe and South Africa, giving solo recitals and also playing concerti and chamber music, recording for radio and South African television. She taught Piano and Music History at Homerton College and St Johnís College at Cambridge University for many years and now lives in North London, teaching adults, young professional pianists and children, privately from home. She is married to Ehsan Lavipour and also teaches as Renťe Lavipour. After taking a break in concert performance in order to raise her two children Daniel and Michelle, she is again giving recitals. Recent concerts have included several in London, Oxford, Cambridge, Harpenden and Southampton as well as a concert tour of South Africa, playing in Cape Town, Johannesburg, Pietermaritzburg and Durban. In 2012 Renťe gave a recital as part of the 50th Anniversary celebrations of Linacre College, Oxford.

Renťe's new CD Piano Recital with music by Debussy, Janacek, Stravinsky, Messiaen and David Earl was favourably reviewed in Classical Music magazine and Fanfare USA (Read the reviews). The 2013 May/June edition of Fanfare contained an inĖdepth interview with Renťe with the CD on their front cover.

In 2015 Renee Reznek will tour South Africa again performing at the Johannesburg International Mozart Festival on the 29th January.